Your Business - Your Choice

Lucas Oil has reformulated its racing oils range and introduced a new racing oils brand in the run up to 2016. The new range will be available with options in mineral, semi-synthetic and fully synthetic specifications.

Announced at the beginning of December 2015, Racing Engine Oil is the very simple and straightforward name for a new Lucas Oil range equipped with New Zinc Technology. 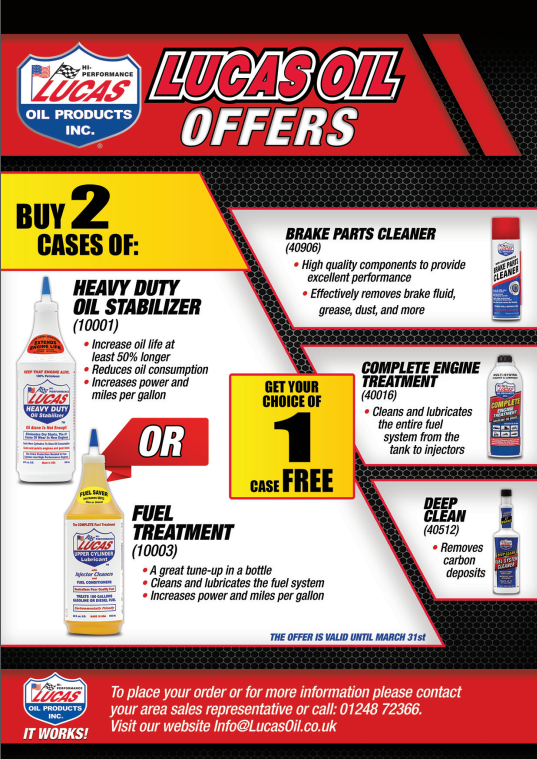 Zinc is a key racing oil additive because under extreme conditions of heat and load, it reacts to increase engine protection. Consequently, racing oils contain more parts per million than oils designed for cars used on public roads.

In addition to high zinc values they feature a complex range of additive packages. The new formulations include packages that are designed with anti-oxidant, anti-wear, anti-foam and anti-seize technology, plus extra lubricity for faster acceleration and a higher RPM, as well as the ability to reduce drag, while maintaining optimum operating pressure levels. In collaboration with each other, they deliver essential qualities for any racing oil designed to achieve outstanding results both on-track and off-road.

Lucas Oilâ€™s new racing oils brand is sure to be the subject of intense motor racing media speculation about its potential for success. Thatâ€™s because Lucas Oil is already a winning racing oil brand in almost every racing class from karts and bikes to cars, dragsters and heavy duty trucks. Although the new generation of racing oils ought to be a tough act to follow, Lucas Oil has developed its New Zinc Technology oils in association with top racing drivers on some of the most demanding racing circuits in the US.

Plans are in hand to introduce the new Racing Engine Oil brand at the Autosport-International Show, at Birminghamâ€™s NEC in January. The range is expected to be available in the UK and Europe from next spring, in time for testing ahead of the 2016 racing season.